To make expert-level heart sound screening accessible to everyone.

To assist frontline healthcare workers in identifying patients with innocent and pathologic heart murmurs in order to save lives and reduce significant burden from the healthcare system.

Leaders in our space

At eMurmur, we are proud to be the leaders in AI-powered auscultation technology. Our team of PhDs and scientists are continuously pushing the boundaries of what is possible in digital auscultation.

We are focused on producing the clinical performance evidence for our diagnosis-assisting algorithms that patients and providers expect and deserve.

We welcome all questions and encourage critical conversations as we believe it’s through teamwork that we achieve greatness.

Provide a comfortable environment in which everyone can thrive to support personal development & growth.

The story of eMurmur began in 2012 in Graz, Austria, a country most famous for Arnold Schwarzenegger, Mozart, the Sound of Music, Schnitzel and skiing. But what many don’t know is that Austria also has excellent higher education schools, one of them being the Graz University of Technology, and it is there where I, Andreas Schriefl, met my name twin and co-founder Andreas Reinisch, who was working on his MSc in Biomedical Engineering, after having completed a BSc in Computer Sciences. At the time we were both working on a research project focused on using automated image analysis for the purpose of extracting collagen fiber orientations from images of human arterial wall tissues.
I quickly realized that Andreas Reinisch was exceptionally smart, driven, and fun to work with, so I asked him if he wanted to collaborate on a heart murmur passion project I was working on during my few “off” hours in the evenings and on weekends. Andreas agreed and our journey began. 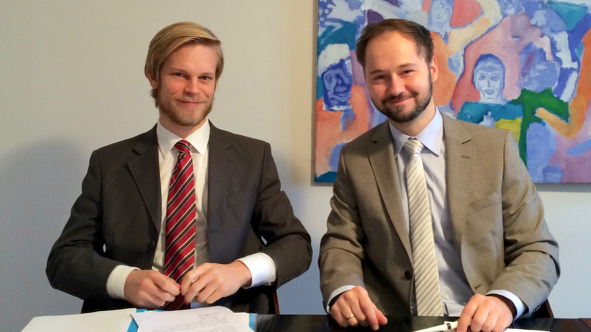 Picture: Founding moment taken on the day we formally incorporated in Austria. Founders: Reinisch (left) and myself (right).

A family member’s 1-month-old baby was diagnosed with a potentially pathological heart murmur by the family’s primary care provider, and referred for a heart ultrasound by an expert. In the end the “pathological murmur” turned out to be benign, but the weeks it took to receive the final diagnosis were understandably stressful and especially worrisome for us all. Experiencing the kind of stress and uncertainty this event caused, and having thought about the broader implications, triggered the idea of looking into better ways to objectively detect a murmur –  sparing family the stress that comes along with uncertainty, and healthcare providers the stress of potentially missing something serious. At the time I had no idea if my idea would even work, and certainly could not have known the path it would send me down, but I knew I had to investigate the possibility and hopefully improve the 200 year old method of cardiac auscultation.

Myself and Andreas joined a local incubator called Science Park Graz that allowed us to work on early prototypes and get early exposure to the start-up world while still pursuing our studies full time. What followed was years of development, clinical work, grants from the Austrian government, private investments and team growth; and finally, us both taking the scary but exciting leap of quitting our day jobs! The company was formally incorporated by myself and Andreas Reinisch in December 2014 in Graz, Austria as Computational Signal Detection Laboratories, or CSD Labs GmbH. Later we would decide to do business under the product brand name eMurmur. During the next couple of years the company focused on further technology development and clinical studies for the real world validation of our algorithms, and won some prizes along the way.

In 2018 it became clear that the initial market entry would be in North America, and the company also incorporated in Canada to run marketing and sales. I chose Ottawa, Canada as our North American hub, not just because of its endless and frigid winters, but because it’s my wife’s hometown, and we quickly found a great community of support for eMurmur here. By mid 2018 we had grown to include a business and marketing team to support our expanded product line made up of the educational apps eMurmur Primer CE and eMurmur University, solutions that would revolutionize the way heart murmur recognition is being taught in schools.

But our biggest and hardest won milestone so far was still to come: 2019 was the year our heart murmur detection solution, eMurmur ID, finally received FDA and CE regulatory clearance. We are proud of how far we’ve come on this journey of many highs and lows, and are excited for all that is to come.